The Countess of Warwick Show 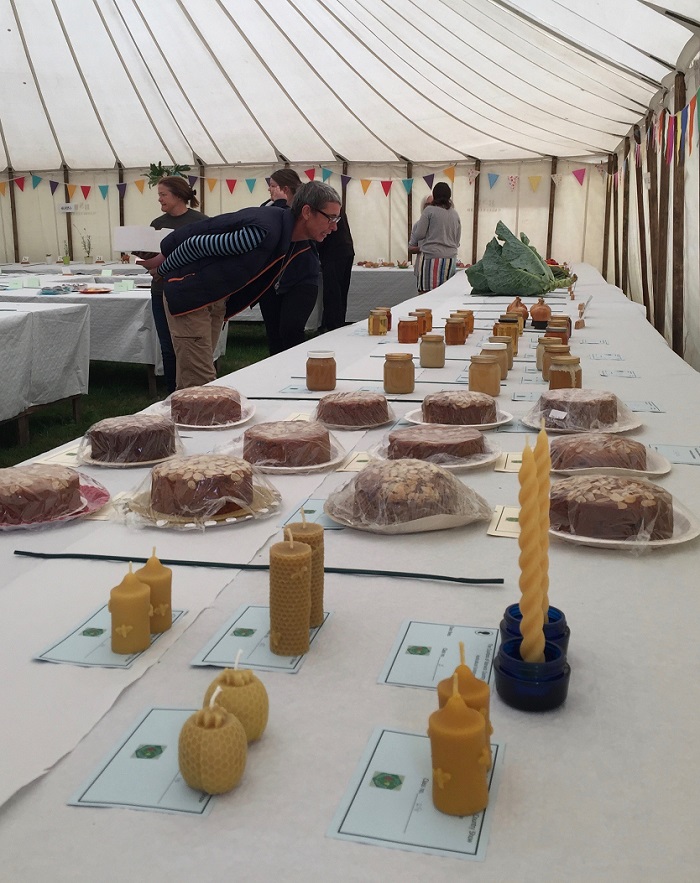 A rather rainy Sunday morning saw us setting up Saffron Walden Beekeepers entries for the horticultural element of the Countess of Warwick show. This large farm show, held in Little Easton, has a long history and is run by a group of volunteers raising money for the local 5 Parishes churches. As well as a horticultural show, there are various stalls and exhibits, animal demonstrations, craft stalls, classic cars, ploughing competitions etc.

The 5 classes being judged by Mike Barke from Harlow were: Clear honey; Creamed honey; Natural-Set honey; Honey Cake and Candles.
We were pleased with more entries this year than last, with most coming from the Clear Honey and Honey Fruit Cake classes. It was fascinating going around with Mike and watching and learning from his methodical process of judging and eliminating.

The overall standard in all classes was high and Mike was particularly impressed with the quality of honey; which shows that as a division we do seem to know what we’re doing. It is excellent that the eventual winners were judged on taste rather than the lack of sticky fingers on the outside of the jar!

It was tricky testing whether the candles would stay alight, as by now the weather was deteriorating and the wind getting up, but we managed. Finally, to the Honey Cake class, and despite the large number of entries Mike managed to taste them all! First, second and third places in all sections, were awarded – see below!

Once judging had finished the show was open to the public so we needed to get over to the Saffron Walden Beekeepers Stall situated in the Animal tent. This had been set up on the previous afternoon and all was ready to go with an Observation hive, Nuc and frames, Smoker etc. as well as written information about beekeeping.

We also had Honey for sale.

Our main objectives at the stall were to educate people about bees. In addition we were aiming to try and recruit new Beekeepers. We also talked about predators such as the Asian hornet.

We were well situated in the Animal tent, as the footfall here was especially good with young families visiting the pigs, cows and goats etc. Sunday proved a little disappointing, as numbers were low due to the poor weather. However, on Monday we were very busy all day.

As usual the Observation Hive was very popular with children and adults alike who were keen to hear more about the honeybee lifecycle. There seemed to be a good awareness about the potential threat of the Asian Hornet and we gave out lots of information on this subject. We managed to take several names of people who were interested in taking up beekeeping and some of these will hopefully have been able to attend the taster day this month.

For the first time since our involvement in the show, helpers on our stall were able to sell their own honey, which proved very worthwhile. Having honey taster pots available meant that people could discover a range of flavours from the wide choice available and this was the source of a lot of interest. It was pleasing to be able to talk about how forage affects flavour. People were keen to buy local honey having heard a lot in the media about the health benefits.

During the final hour on the last day of the show the award ceremony took place in the Horticultural tent. Certificates and Cups were handed out, including any Beekeepers present.

Although it was a busy weekend it was also very enjoyable and the time went remarkably quickly.
We had a good team of beekeepers helping out but I would urge anyone who hasn’t been involved this year to give it a go next year.